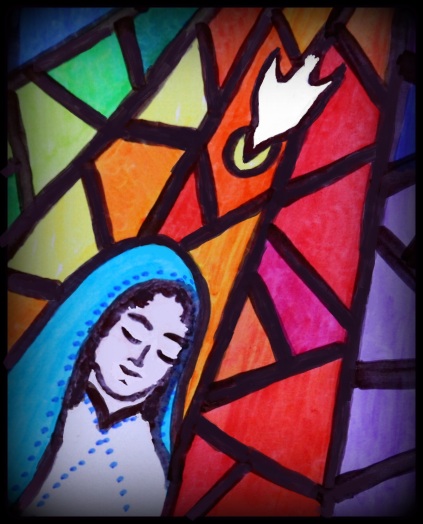 The notion seems absurd. And it is absurd, if we only consider the meaning in the bodily sense. I will never carry the Son of God in my womb as did the Virgin.

Yet the Lord Himself told me I can be His mother in an even more important way. And He has said the very same thing to you.

Before I comment further, let us hear how St. Augustine explained these words of Jesus: (if you prefer to read rather than listen, the text is printed in blue below).


Text: from a sermon by St. Augustine, Bishop

Stretching out his hand over his disciples, the Lord Christ declared: Here are my mother and my brothers; anyone who does the will of my Father who sent me is my brother and my sister and my mother. I would urge you to ponder these words. Did the Virgin Mary, who believed by faith and conceived by faith, who was the chosen one from whom our Savior was born among men, who was created by Christ before Christ was created in her - did she not do the will of the Father? Indeed the blessed Mary certainly did the Father’s will, and so it was for her a greater thing to have been Christ’s disciple than to have been his mother, and she was more blessed in her discipleship than in her motherhood. Hers was the happiness of first bearing in her womb him whom she would obey as her master.

Now listen and see if the words of Scripture do not agree with what I have said. The Lord was passing by and crowds were following him. His miracles gave proof of divine power, and a woman cried out: Happy is the womb that bore you, blessed is that womb! But the Lord, not wishing people to seek happiness in a purely physical relationship, replied: More blessed are those who hear the word of God and keep it. Mary heard God’s word and kept it, and so she is blessed. She kept God’s truth in her mind, a nobler thing than carrying his body in her womb. The truth and the body were both Christ: he was kept in Mary’s mind insofar as he is truth, he was carried in her womb insofar as he is man; but what is kept in the mind is of a higher order than what is carried in the womb.

The Virgin Mary is both holy and blessed, and yet the Church is greater than she. Mary is a part of the Church, a member of the Church, a holy, an eminent - the most eminent - member, but still only a member of the entire body. The body undoubtedly is greater than she, one of its members. This body has the Lord for its head, and head and body together make up the whole Christ. In other words, our head is divine - our head is God.

Now, beloved, give me your whole attention, for you also are members of Christ; you also are the body of Christ. Consider how you yourselves can be among those of whom the Lord said: Here are my mother and my brothers. Do you wonder how you can be the mother of Christ? He himself said: Whoever hears and fulfills the will of my Father in heaven is my brother and my sister and my mother. As for our being the brothers and sisters of Christ, we can understand this because although there is only one inheritance and Christ is the only Son, his mercy would not allow him to remain alone. It was his wish that we too should be heirs of the Father, and co-heirs with himself.

Now having said that all of you are brothers of Christ, shall I not dare to call you his mother? Much less would I dare to deny his own words. Tell me how Mary became the mother of Christ, if it was not by giving birth to the members of Christ? You, to whom I am speaking, are the members of Christ. Of whom were you born? “Of Mother Church”, I hear the reply of your hearts. You became sons of this mother at your baptism, you came to birth then as members of Christ. Now you in your turn must draw to the font of baptism as many as you possibly can. You became sons when you were born there yourselves, and now by bringing others to birth in the same way, you have it in your power to become the mothers of Christ.

These are powerful words indeed.

I’m sure the words of Jesus in St. Augustine’s sermon have been preached about in many different ways throughout the centuries. But what has struck me about them just now is how very flawed my thinking has been.

If you are a regular reader, you may recall that my word for 2015 is “chasten”. Although one might expect, with a word like that, I’d be heaving a sign of relief that the year is almost over.

I’ve rather come to like this little word that chose me. It is a wonderful and refreshing thing to be chastened by our loving God – to have Him point how wrong and stupid has been my thinking so that I can start to work on some genuine repentance and growth.

Anyway, about my current chastening. When I encountered these words of Augustine about being a mother of Christ, I realized that I wasn’t making much effort in this area at all.

Oh, I’ve been working on doing the will of the Father – clearly no small task and certainly not done flawlessly. But the part I really haven’t been doing is bringing as many others to birth as possible.

In my “coming of age” during the late ’60’s and early ’70’s, I grew up with a radical consciousness of how recklessly Western “Christianity” forced itself on other cultures, stripping them of their dignity and sometimes their lives. In my outrage against such injustices, the Native American people were primary in my awareness.

I developed a mindset that we should not try to push our faith on others. Period.

It was not that I didn’t think that Christianity was worth sharing but, in my mind, I couldn’t separate the notion of evangelization with cultural rape. What had been done to these beautiful peoples of God in the name of Christianity was nothing less.

Along with that, my understanding of evangelization during young adulthood became contaminated with an experience of evangelical Christianity that was limited to being accosted on street corners by insistent youth who had to know if I had been “born again”. It was never enough that I was a Christian.

I include this background by way of explanation rather than excuse. Looking back, I now see how I came to the erroneous view that it is best to simply respect people where they are and make no attempt to bring them to the Christian faith.

There’s nothing erroneous about respecting people where they are, of course. It’s the second clause in that sentence that is the clincher.

Our adversary is very clever. He can make doing the wrong thing seem so much like doing the right thing, just by putting two phrases together like that. And I fell for it. For a very long time.

No more. I want to be a mother of Christ.

I took a break from my writing and now I am back. I realized that there is one very important point that I must clarify.

It is a good thing that the Kingdom of Heaven does not depend on people like me getting it right.

I say this because I am well aware that God in His goodness has very likely made use of me to help bring people to Him. If I am genuinely trying to do the will of the Father, all of my wrong thinking and personal weaknesses are not going to stop the powerful words Jesus gave us to pray, “Thy Kingdom come…”

It will come. It is coming. It is here among us.

But this makes it all the more urgent that I wake myself from the sleep of my spiritual sloth and recognize that, indeed, I must bring as many as I can to the font to be born as members of the Body of Christ.

Not only is it my duty – it is my joy – as it is the joy of a mother to bring children into the world.

It is also not easy. It is not easy in today’s world to know how to do this.

Approaching strangers on street corners is certainly not the place to begin. To bring others does not mean to pressure them. But what is it I am to do then?

Because I do not know and cannot know, it is one of those occasions when it is good to remember that we have been given the Spirit who teaches us all things.

Perhaps the most simple and obvious of His instructions is to pray.

I am not to pray with the attitude of one who thinks herself in a superior position. Remembering that the Church is a hospital for the sick, I must always be mindful of the meaning of my membership. To remember others prayerfully, to ask God to send them the grace to find their way, is to ask that they come to know the healing that I myself am still experiencing.

My friend in heaven, St. Thérèse of Lisieux, gives me great inspiration and encouragement in bringing souls to Christ. While prayer may be the words I say, she also reminds me that every little sacrifice or suffering becomes a prayer when embraced out of love. She brought many to God in this manner, her “little way”, without ever stepping outside of her convent.

In many other wordless ways the Spirit instructs. For much of what we are to do is wordless. It is not that words are of no value but rather that love speaks much more clearly and to the heart.

If I tell someone what brings me joy and peace, it will mean little to them. If I tell them that I have a faith based on love, it will count for nothing. But if they observe me living a deeply peaceful life of joy they will wonder. If they feel loved by me in way that makes no sense to them, they will want to know where this comes from.

A beloved patient of mine, now deceased, used to say, I want what you have. She struggled mightily over faith – but I believe she now has what I have and more. Much more.

So, if the Lord has allowed me to be His mother even when I was so oblivious and resistant to His call, how much more may He make use of me now that I am coming awake?

It is now the time of preparation, the time we ready ourselves to more deeply understand and celebrate the Birth that changed everything. It is a time of awakening.

But it is more than just another Advent season leading up to another Christmas. It is a time in which the world is so full of darkness that we can only dream of light, so full of hate that we can barely remember peace.

It is a time to sit in the darkness resolutely, with hope, until we see the Light.

It is the time to become a mother of God…

2 thoughts on “On becoming a mother of God”