I set the box on the counter, paid the clerk and exited the post office as though it were any other transaction. Once in my car, however, my heart felt unbearably heavy and my eyes welled up with tears.

“Good-bye, little camera,” I whispered into the emptiness. “I’m so sorry.”

The new one had been so excited about the adventure (see past post, New beginnings) that she hardly minded the long day of being jostled about and stuffed under seats in her camera bag. Her camera bag, she thought with contentment. She realized that the bag had once belonged to the old camera but she no longer felt threatened by her predecessor. She understood now. Her person was grieving for her old friend but welcomed and accepted her without reservation.

It was dark when the last of the three airplanes they had boarded that day landed in the tiny airport in central California. The new one listened with interest as her person greeted her old friend, Rodger, whom she hadn’t seen in decades. She could not see anything from within the camera bag, of course, but she was intrigued and anxious to view the outside world that awaited her. Things were different here. She could feel it in the air.

The next morning was bright and sunny. Accompanied by Rodger, the new one and her person emerged into cool morning air and were immediately greeted by a collage of colors and shapes, light and shadows. Click! Click! The new one began playing and exploring with a studied excitement.

With her zoom lens on, she could see the ocean waves at the end of the street. Yet along the way, there were so many flowers! She didn’t know what to do first – it was all so very beautiful. Click!

As much as she wanted to pause and absorb the colorful blooms, the ocean drew her inexorably. The flowers would wait. She and her person had to see the ocean.

Although she had imagined this moment many times while waiting in the dark, the new one was utterly unprepared for what awaited them at the end of the road. In a vast expanse of blue, the sky and the sea seemed to kiss lightly at the horizon, while crashing waves belied the true power of ocean as it beat itself against the rocky shoreline. 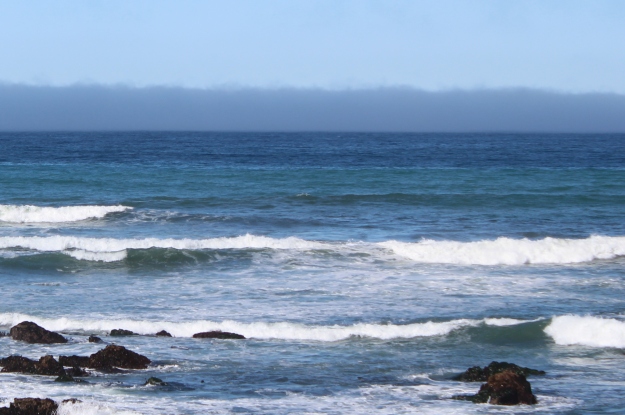 Massive rock structures rivaled the sea in their breathtaking beauty, while each moment seemed to bring new angles of light and shadow. 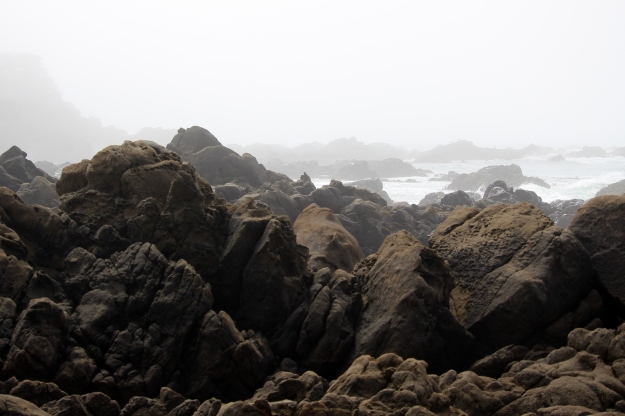 The sea turned from blue to green to gray and back again, sharp lines blurring into hazy fog that soon blew their way back into focus. The new one framed and focused and clicked to her heart’s content.

The day was still very young and the new one could not have imagined being happier. She felt so alive, so joyful, as the three of them walked through fields of flowers while never losing sight of the glorious dome of sky and basin of roaring sea.

Next it was time to explore the smaller inhabitants of this vast and seemingly endless world. After her person and Rodger had climbed down to a somewhat lower vantage point, the new one began zooming in on the tiny creatures dwelling in the little tide pools formed here and there among the rocks. A hermit crab. Click! A sea anemone. Click! 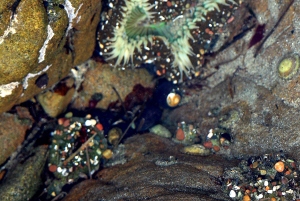 The colors and textures fascinated her and there was so much to see. She wanted to study each and every detail closely…

Suddenly, from the secure spot where she was strapped around her person’s neck, the new one felt something very odd. Her person’s feet were stepping strangely out of control. What was happening?

There was a splash. Cold water quickly invaded all the new one’s hidden places, the sting of salt burning her most sensitive surfaces in seconds. With that, she knew no more.

The new one had received a life total of only 132 images when she died on that very first day of her great adventure.

It was a glorious morning. I had not seen my spiritual brother, Rodger, in over 30 years and yet it felt so natural to follow his lead as he took the new one and me from one breathtaking beauty to the next.

Never having been to the coast before, my soul felt as though it had entered a living cathedral where everything gave glory to God together in a perfect synchrony of movement and color. I couldn’t stop smiling.

The vastness of the sky and sea seemed to call me to enlarge my heart so I could absorb its God-ness. Yet, amateur photographer that I am, I have always had a special love for closer looks at the tiny, hidden creatures of nature that a only a camera lens can provide.

Hence, when Rodger led us to the tide pools, I welcomed the shift to a smaller world. After some introductions to the different species, we each wandered in different directions and the new one and I received some images. The air was still cool but the sun was shining warm. What could be more delightful?

What happened next is hard to explain. The new one and I were gazing at some interesting plant growth when it seemed as though my feet started to move. I cannot say how or why. I found one foot moving to a large stone in front of me but I could not stop it. The other foot moved reflexively to the next stone to try to gain footing but I still could not stop.

And the next thing I knew, I was suddenly immersed cold salt water – just deep enough to drench everything but my head. Stunned, I immediately stood up, dripping and heavy from all of the sea my clothes and shoes could absorb in those few seconds.

I looked down at the new one, still hanging faithfully from her strap around my neck. A yellow light I had never seen before was blinking. Knowing this could not be good, I turned her power switch to the “off” position and accepted the extra sweatshirt that a concerned Rodger was now offering.

Strangely, I still couldn’t stop smiling. It seemed as though I should be upset but I wasn’t. I was chilly. Wet. Definitely wet. But I was very much in the moment I was in and nowhere else. I was still in the living cathedral and nothing else really mattered.

There was a vague sadness about what had happened to the new one. But it was simply something that had happened and could not be undone. It was just reality. And so I moved forward, placing one squishy foot in front of the other, my faithful brother at my side.

When I emerged from the warm shower in dry clothes, I was greeted by a cup of warm ginger tea. Judy, Rodger’s wife, was on the phone with Canon, trying to determine what, if anything we could do for the new one.

When it was evident that I would need to mail my drowned friend back to her maker, Judy immediately offered to lend me one of her digital cameras for the remainder of my stay. I would buy a memory card to hold the images so that I could take them home with me.

I had only met Judy for the first time the night before. In that moment, I knew she was my sister.

It did not take long to realize that what I had lightly written of as an “adventure” was so much more. Literally hundreds of images were received. Many cups of ginger tea were drunk. Meals were eaten, naps were taken, books read. Prayers were prayed and thoughts were shared on into the evening.

Oh – and did I mention two very unique and wonderful teenage boys?

But throughout this time, I continued to feel as though I remained in that living cathedral, though at the time I would not have had a name for it. Whether I was indoors or out, alone or with one or all of the others, there was a sense of being in a sacred place.

At one point, Rodger and I talked some about the idea of pilgrimage. He felt some interest stirring in such an undertaking. As I pondered this, I realized that this trip across the country to see him and his family was, for me, a pilgrimage.

We often think of pilgrimage as a journey to a particular holy place, perhaps a place were many people have experienced God’s love in miraculous healing (such as Lourdes, in the Catholic tradition) or where many holy people live together as vessels of God’s grace (such as Mt. Athos, in the Orthodox tradition).

While that is indeed a true meaning, it is true not because one geographical place can claim God’s presence more than another, but because the journey itself disposes our hearts to meet God more deeply.

We take on the journey because we know we need God. We may simultaneously want other things, such as to see a friend or to have a break from work, but what we need is God Himself and nothing more.

When we say to God “I need you” so deeply that we stop everything else in our lives and make a journey for Him, He gives Himself in great abundance. It may not always be what we expect – but He does not ignore our longing.

This was indeed a sacred journey. I cannot express in words all of the dimensions of the holiness that I experienced. But I can say that I came away changed by my encounter with God – God in the ocean and the sky, in the seals and otters, in the flowers, birds, reptiles and butterflies.

…and most of all, God in those whose hearts long for Him through the same moments of light and shadow as mine.

To Him be eternal praise and glory.

(The following video invites you to join in some of the wonders God shared with me during this pilgrimage. Be sure to watch in full screen!)


Pilgrimage from Mary Benton on Vimeo.